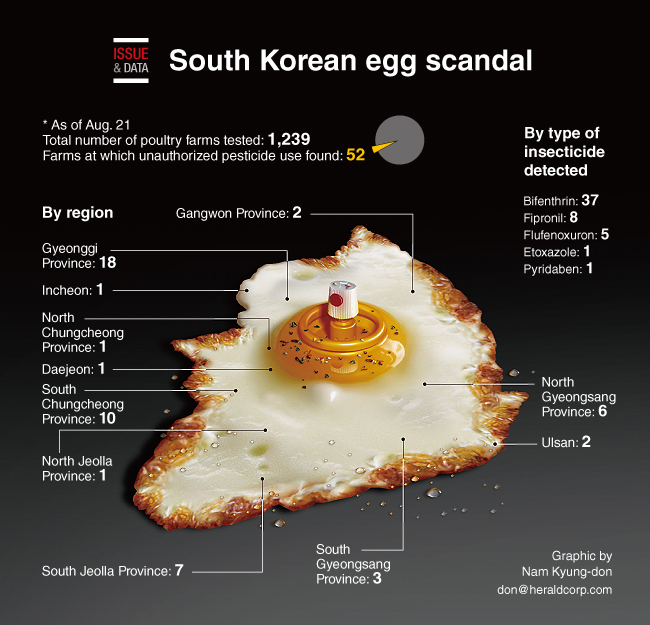 Animal rights groups on Monday called for measures to reform the livestock industry, saying that factory farming is behind the egg contamination scandal.

The pesticide-tainted egg crisis is only a prelude to bigger threats to the food safety and public health unless the practice of cramming chickens into battery cages to maximize profits is stopped, they said.

“It is a consequence of industrialized livestock production and it poses a threat to our food security,” said Jeon Jin-kyung, executive director at Korea Animal Rights Advocates, during a press briefing.
“
President Moon Jae-in promised to overhaul the industrial livestock production, but the question is how he will specifically do so,” she said, criticizing the past governments’ lukewarm efforts to tackle the “fundamental” problem. 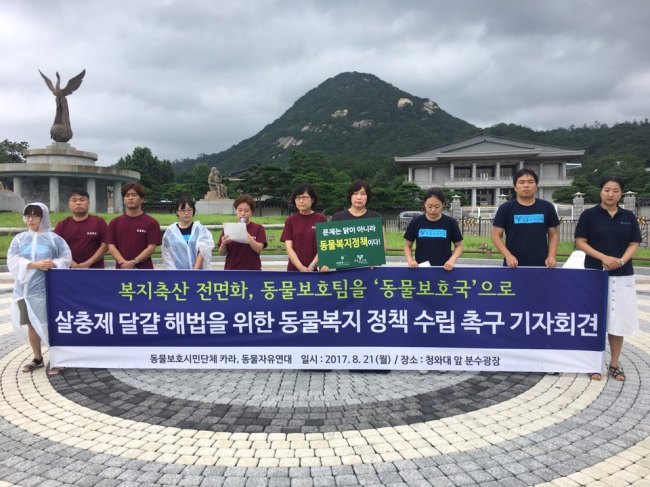 The calls come amid growing fears over the distribution of eggs contaminated with insecticides, which experts say could harm human kidneys and liver if consumed in large quantities.

So far, the 52 poultry farms have been revealed to have sold eggs tainted with high levels of insecticides.

The farms had used eight kinds of pesticides including fipronil and flufenoxuron, which are used to kill fleas, lice and ticks on animals, according to the government’s inspection.

About 1370 farms, or 94 percent of the poultry farms in the country, use battery cages that severely restrict animals’ movements and pose hygiene issues, according to government data. The floor area of a cage for each bird is about the size of a sheet of A4 paper.

South Korea is not alone. Eggs containing insecticide fipronil were found in the food chain in 16 European countries and Hong Kong in August, according to the European Commission.

The animal rights activists highlighted that the egg scare could have been prevented if chickens had been able to freely move around and remove ticks by cleaning themselves with sand and soil.

“As five to six chickens are locked in a battery cage, their immune system weakens and diseases spread in no time. As there are no ways to get rid of ticks, farmers cannot help but spray insecticides. In such an environment, the tainted egg crisis and the outbreak of bird flu is just a natural consequence,” activists said.

Intensive farming is also to blame for the outbreak and spread of the bird flu virus, they said.

Until April, nearly 40 million poultry were culled due to bird flu, which was first reported in November last year. When bird flu infects a single bird on a chicken farm, the whole population is destroyed to stop the spread.

The government said it would tighten regulations on the use of insecticides and ensure codes are printed on eggshells to inform consumers of when and who produced the eggs. In the long term, it will expand a system to certify eco-friendly farms with high animal welfare standards, it said.

But animal welfare groups said it is not possible under the current system that lacks a comprehensive animal welfare policy and government body in charge of it.

“To push for the reforms, a team currently in charge of animal welfare under the Agriculture Ministry should be expanded so that it can effectively improve animal welfare standards in the face of the livestock industry’s pursuit of their own interests,” they said.

The government has received criticism for its poor response to the egg contamination scare — including its failure to carry out a thorough inspection and lack of coordination among relevant government bodies.

“In the wake of this case, we have to examine the entire livestock industry’s safety control system and promptly craft measures that can be trusted by citizens,” Moon said at a Cabinet meeting.. 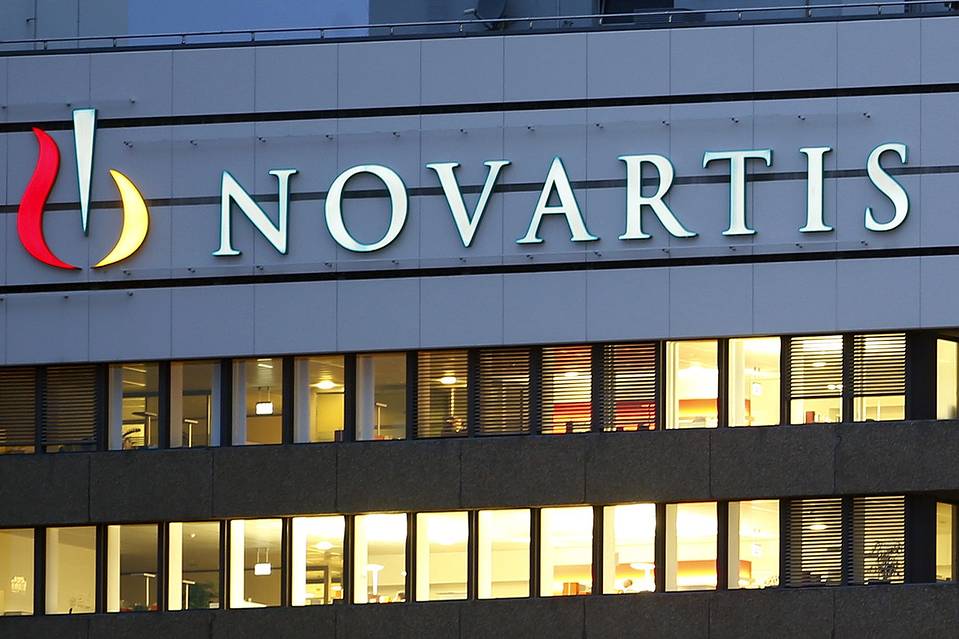 When did the medical institutions become “industry” to go abroad? And who is these experts?

The Ministry of Health and Welfare and the Korea Health industry Development Institute (KHIDI) are working together in operating the “Global Healthcare Key Opinion Leaders” (GHKOL) and has selected 47 members for the group that will provide consultations on legal, commercial and financial matters specific to individual countries, officials said. The members, formally appointed on Friday, organized a session on China on the same day, briefing the participants on strategies and the latest trends in China’s health care industry.

Institutions planning to expand overseas can apply for the group’s assistance, and consulting fees will be paid for by KHIDI.

“The specialist members of GHKOL will ease the burdens of medical institutions who want to go overseas, and at the same time help smaller and regionally based institutions actively seek expansion in other countries,” the health ministry said. (Yonhap) 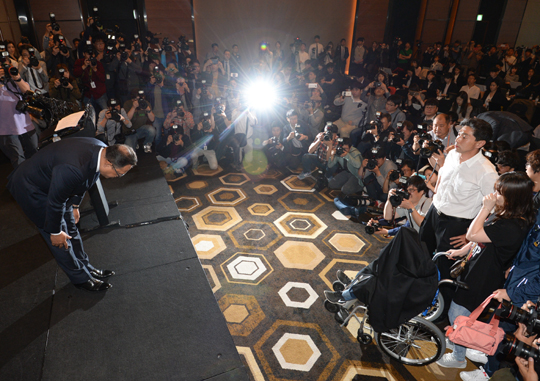 “What’s the Use?” Atar Safdal, head of Oxy Reckitt Benckiser Korea bows and apologizes to the families of the victims of their humidifier sterilizer during a press conference at the Conrad Hotel in Yeouido, Seoul on the morning of May 2. Yi Jun-heon

Oxy Reckitt Benckiser, whose humidifier sterilizers caused harm to the most number of victims, officially apologized five years after the incident first broke out. They explained that the apology was delayed because they tried to provide sufficient compensation measures, but they failed to present any specific plans to compensate the victims. The company will have a hard time avoiding criticism that their latest apology was rushed to resolve the situation as prosecutors launch an investigation into the incident and more and more consumers join in a boycott of their products.

Atar Safdal, head of Oxy Reckitt Benckiser Korea (currently, RB Korea) held a press conference at the Conrad Hotel in Yeouido, Seoul on May 2 and said, “We bow our heads and apologize to all the victims and their families who suffered lung damage due to the humidifier sterilizer. We fully realize our responsibility in failing to promptly provide appropriate measures.” According to the prosecutors, 177 people including 70 dead suffered damages from using an Oxy product. From 2004 to 2010, over 2.2 million Oxy humidifier sterilizers were sold.

Safdal said, “We will gather a panel of experts by July and provide a compensation package to those who used Oxy products among the victims classified as level 1 and 2 victims. We hope that the 10 billion won we have already provided will be used to help other people who suffered from the humidifier sterilizers.” As for the scale of the compensation, he only stated the basic position, “We will decide after gathering the panel and discussing with the victims.”

It appeared that the company was also trying to dismiss the allegations that the company tried to conceal evidence as an employee’s mistake. Safdal said, “Our company has a code of conduct that all employees must comply with. If misconduct is confirmed, we will immediately take corrective action.” When a reporter asked if this apology was from the headquarters in the United Kingdom, Safdal said, “You can think of it as representing both the Korean branch and the British headquarters. The CEO of the head office in Britain asked me to apologize on behalf of him and headquarters will support us when we provide the compensation package.”

At the press conference this day, about a dozen victims and their families including a ten-year-old boy who has to live with the help of an oxygen tank due to injuries suffered from the humidifier sterilizer were present. Some families approached the stage and strongly protested, “You wouldn’t see us for five years. This apology is just for show because the prosecutors have launched an investigation.” They told the company, “Voluntarily withdraw from the Republic of Korea” and claimed, “We want a sincere apology, not one just for show.” 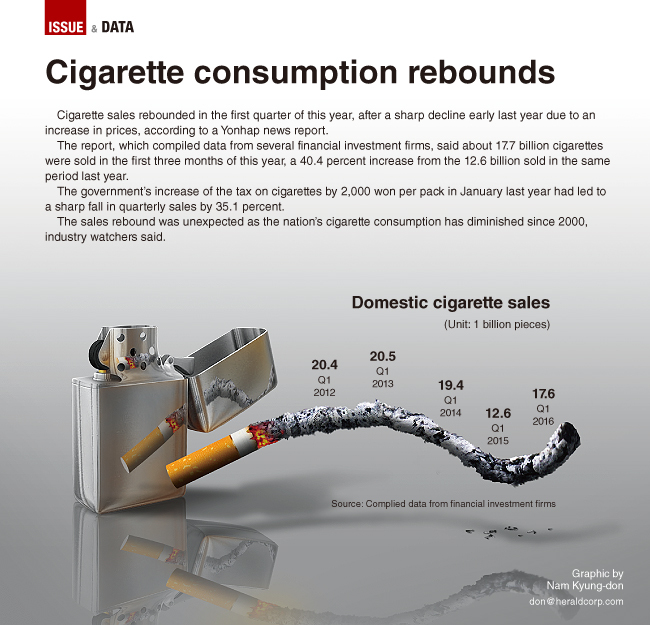 Cigarette sales rebounded in the first quarter of this year, after a sharp decline early last year due to an increase in prices, according to a Yonhap news report.

The report, which compiled data from several financial investment firms, said about 17.7 billion sticks of cigarettes were sold in the first three months of this year, a 40.4 percent increase from the 12.6 billion sticks sold in the same period last year.

The government’s increase of the tax on cigarettes by 2,000 won per pack in January last year had led to a sharp fall in quarterly sales by 35.1 percent.

The sales increase was unexpected as the nation’s cigarette consumption has diminished since 2000, industry watchers said.