What does US’s victory about pharmaceutical pricing system mean to Korean people and healthcare system?

Does idea of “free-trade” more important than efficient purchasing of single-payer system to assure medicine access to all?

“Another major victory for the US is the agreement to hold additional negotiations to revise South Korea’s pharmaceutical pricing system for innovative medicine from around the world. American pharmaceutical firms have repeatedly complained that the price of medicine is set too low by South Korea’s national health insurance.” 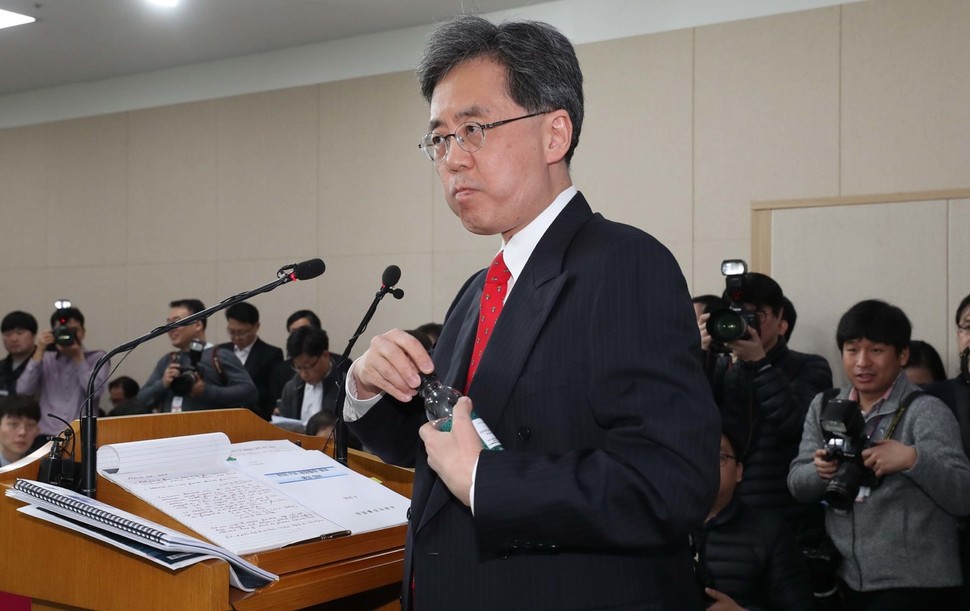 South Korean Trade Minister Kim Hyun-chong takes a drink of water during a briefing to discuss the results of the KORUS FTA revision agreements at the Central Government Complex in Seoul on Mar. 26. (by Baek So-ah, staff photographer)

While presenting results of the negotiations to revise the South Korea-US Free Trade Agreement (KORUS FTA) at the Central Government Complex in Seoul on Mar. 26, South Korean Trade Minister Kim Hyun-chong said that South Korean negotiators had protected the nation’s interests. “We participated in the negotiations more with the aim of defending the national interest than of protecting the KORUS FTA. We gave ground where appropriate while securing our interests [in the agreement],” Kim told reporters.

South Korea had found itself at a disadvantage in the negotiations because of the major divide between the two countries from the outset of the negotiations, which was compounded by American tariffs on steel. Despite these circumstances, Kim said, the negotiators managed to protect the South Korean market as best they could.

As Kim said, balancing the two sides’ interests was not an easy proposition in the negotiations, which were launched because of the US’s unilateral demand for and objective of “resolving the trade imbalance.” But a close look at the final tally of the negotiations also suggests that South Korea won the symbolic victories, while the US pocketed the practical benefits. South Korea received assurances about securing import quotas for steel and institutional and procedural improvements for investor-state dispute settlements (ISDS) and trade remedies. The US, on the other hand, received concessions that will have an immediate effect, such as easing import restrictions on automobiles and improving the pricing system for new drugs.

South Korea is the first country exporting steel to the US to secure a steel import quota (70%, or 2.68 million tons, of average yearly exports between 2015 and 2017). While accepting some of the US’s demands about American automobiles and pharmaceuticals, South Korea basically managed to arrange the first deal on steel. But a senior official from the Ministry of Trade, Industry and Energy said, “We initially wanted to secure a tariff-rate quota that would give us a steel quota and allow us to export the volume above that the quota to the American market with a tariff of 25%, but that didn’t work out.” The volume of steel exports will fall to 70% of the volume of previous years, and no more exports will be allowed after the quota has been reached. “This resolved the instability and the unpredictability faced by exporting companies,” Kim said when asked about the swift settlement of the steel issue.

One view is that the pros and cons of the steel import quota, which is limited to 70% of the average imports over the past three years, must be compared with the alternative scenario in which the tariffs take effect.“The South Korean steel industry preferred the quotas to the tariffs. If the countries exempted from the tariffs and the exempted categories increase in the future, President Trump is likely to raise the tariffs higher than 25% in order to achieve his import reduction goals. In that situation, we would have been forced to quickly get off the list of countries facing thethe tariffs. We can only export 70% of the previous volume, but if the price of steel in the US rises because of the imposition of tariffs, the value of South Korean steel makers’ exports might actually increase,” a spokesperson for the Ministry said.

The decision to relax environmental and safety standards for automobiles that the US has repeatedly described as non-tariff barriers to trade came as no surprise. South Korea agreed to increase the number of American automobiles that can be imported even if they do not satisfy South Korean safety standards (about the color of turn signals, for example) as long as they satisfy American standards from the current level of 25,000 vehicles per company to 50,000 vehicles.“While we increased the number to 50,000, the actual number of vehicles imported each year by the US’s three big automakers is below 10,000, so [50,000] has no effect on the actual import volume,” Kim said. But others argue that South Korea gave major concessions on automobiles in order to reach an agreement on steel. When calculating South Korea’s costs, it is also necessary to include the government’s and various industries’ sharp increase in imports of American products and their expansion of investment in the US, which were aimed at highlighting the FTA’s benefits.

Furthermore, the timeframe for repealing the 25% tariff on Korean pickup trucks was extended by 20 years, from 10 years after the KORUS FTA took effect (that is, 2021) until 2041. “At the moment, basically no pickup trucks are being exported to the US,” Kim noted.But in Kim’s book Talking about the KORUS-FTA, when he played up the importance of ending the tariff on pickups. “We aren’t currently manufacturing pickup trucks, but we will be in the future. The important thing is that [the US’s] high tariff of 25% on pickup trucks must be lowered so that we can attract investment,” he wrote. In effect, the extension of the timeframe greatly reduces the likelihood of South Korean companies breaking into the growing US pickup truck market.

Another major victory for the US is the agreement to hold additional negotiations to revise South Korea’s pharmaceutical pricing system for innovative medicine from around the world. American pharmaceutical firms have repeatedly complained that the price of medicine is set too low by South Korea’s national health insurance.

Among South Korea’s gains, one of the more notable is the improvement of the system for settling investor-state disputes. The two sides agreed to include in the revised agreement a provision to prevent investors who have invested capital in the other country from filing frivolous disputes and to ensure that the two governments’ due sovereignty over policy is not infringed.

There will also be the addition of a section to ensure procedural transparency, such as releasing documents from local anti-dumping investigations, when either side initiates trade remedies (that is, import restrictions). This measure is designed to provide a way of dodging or blunting trade pressure from the US. But Kim said, “The results of the negotiations do not allow us to say categorically that the US trade risk has markedly decreased, and trade pressure is likely to continue for the rest of Trump’s time in office.”

The specifics of the revisions of the ISDS and trade remedy systems will be made public when the revised agreement is officially signed, following additional deliberations with the US.