“There are a million migrant workers in Korea, but the continuing human rights violations and labor exploitation is an international disgrace and a shameful portrait of South Korean society. ”

After a series of deaths of migrant workers who worked cleaning the septic tank of a rural pig farm, people are raising their voices calling for the government to protect the rights of laborers and prevent industrial accidents. Labor and social NGOs such as the Migrants’ Trade Union held a press conference in front of the government office in Seoul on June 4 and announced, “Every year, an average of 2.8 migrant workers died after suffocating in the septic tanks, but this year, four have already died.” There are a million migrant workers in Korea, but the continuing human rights violations and labor exploitation is an international disgrace and a shameful portrait of South Korean society. 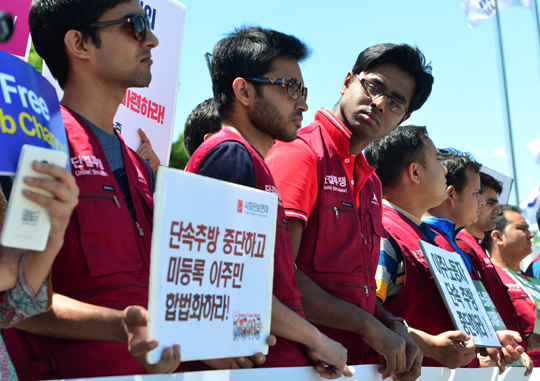 The reliance on foreign labor in South Korea’s agricultural and livestock sector as well as the so-called “3D” manufacturing industry concerning dirty, difficult and dangerous tasks is growing. Nevertheless, the migrant workers working in the agricultural and livestock sector continue to suffer human rights violations, such as physical and verbal abuse, and they are forced to endure harsh working conditions. The death of four migrant workers at a pig farm last month is also connected to such background. On May 12, two Nepalese workers suffocated and died while cleaning a septic tank at a pig farm in Gunwi, Gyeongsangbuk-do. The suction machine for the excrements broke down and the workers manually cleaned the tank without any safety equipment such as masks, eventually dying from the toxic gas. Also on May 27, a Chinese worker in his sixties and a Thai worker in his thirties also lost consciousness while cleaning the excrements at a pig farm in Buknae-myeon, Yeoju-si, Gyeonggi-do. They were moved to a hospital, but later died.

Migrant workers working in the rural areas are “excluded” from provisions pertaining to working hours and holidays according to Article 63 of the Labor Standards Act. They cannot properly receive overdue wages as well as leaves and overtime pay. This is why people are calling migrant workers the modern-day serf, and joke that their workdays are Monday, Tuesday, Wednesday, Thursday, Friday, Friday, and Friday. In particular, the Act on the Employment, Etc. of Foreign Workers (Employment Permit System) restricts the migrant workers’ freedom of occupation, because it limits the number of times and the time to change work places. In particular, workers who entered the country with a work visa in the agriculture and livestock sector are banned from finding employment in the manufacturing and service industries, which have relatively more jobs.

The government should immediately revise legislation that work against labor and human rights, such as the Employment Permit System, and concentrate on protecting the basic rights and labor rights of the migrant workers. Otherwise, South Korea will not be able to escape from the stigma as a “labor hell” and as “a country that exploits labor,” instead of gaining the reputation as a “land of opportunity.”