The Seoul Metropolitan Government said it has selected a total of 3,000 applicants and will provide them with 500,000 won (US$448) per month, for up to six months.

The plan, which has been opposed by the central government, is designed to support people from ages 19 to 29, who have lived in the capital city for a year or more and work less than 30 hours a week. Enrolled students cannot apply for the program.

The city government said it has already provided the allowance to 2,831 applicants, who have signed agreements with the metropolitan government, earlier on Wednesday.

More than 6,000 people submitted applications in July. The city government said the final list is based on their income level, period of unemployment and whether they have families to support.

The metropolitan government has allocated some 9 billion won to test run the plan this year before expanding it in the years to come.

The Ministry of Health and Welfare, meanwhile, immediately issued a correction order to revoke the city government’s decision.

The ministry stressed that the allowance plan does not root out the fundamental cause of the high unemployment rate and that it will only lead to more side effects down the line, including serious moral hazards among young job seekers.

“There is no safeguard to keep tabs on where people spend the free handouts,” a government source said.

The unemployment rate for young people aged from 15 to 29 reached 10.3 percent last month, up from May’s 9.7 percent, according to the report compiled by Statistics Korea. 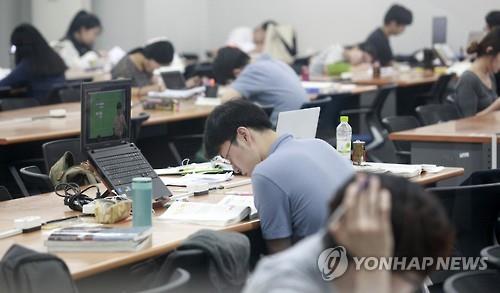