Still, South Korea’s Samsung Electronics has denied withholding crucial information from workers about which chemicals they have been exposed to at its factories. 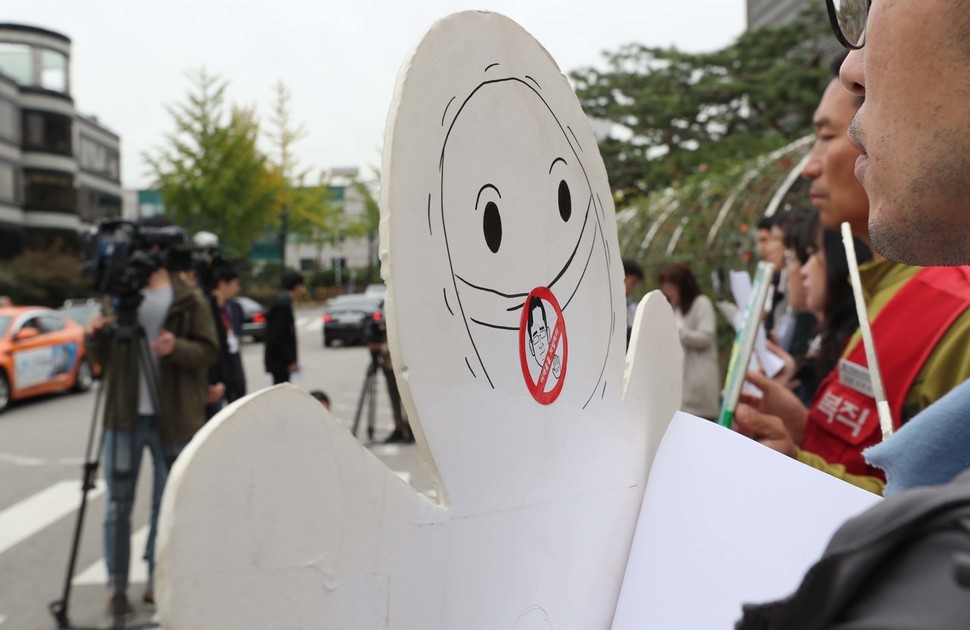 The workers’ rights group Bannolim, which includes family members of former Samsung employees who were sickened with occupational diseases while working at the company’s semiconductor facilities, demonstrates outside the Seoul Central District Court during the first trial of Samsung Vice Chairman Lee Jae-yong on Oct. 12. (by Baek So-ah, staff photographer)

Controversy continues over a report measuring the work environment at Samsung’s semiconductor factories. While South Korea’s Ministry of Employment and Labor continues to maintain that releasing the report was necessary to expedite the compensation of the victims of industrial accidents, Samsung Electronics countered by suing the Ministry for releasing the report to the victims and arguing that the report includes business secrets. But several experts in the field of occupational health find Samsung’s arguments hard to believe.

The Occupational Safety and Health Act requires workplaces dealing with hazardous chemicals to have their work environment measured by an external organization with professional credentials at least once every six months. The resulting report covers the usage of chemicals in each industrial process, a chart showing the location where harmful chemicals were measured for each work site, the measurement of those harmful chemicals and the amount of time that workers are exposed to those harmful chemicals. The workplace in question must display the report so that workers can read it and must also submit it to the local employment and labor board.
Samsung contends that the measured location chart could be used to ascertain the arrangement and sequence of its industrial processes and that the measurement of harmful materials could be used to determine what chemicals are not used by other companies.
But experts describe Samsung’s claims as preposterous. “Since the measured location chart is basically designed to confirm at what point harmful chemicals appeared, it’s little more than vertical lines drawn in a box. The work process chart that the company provides the measuring organization does not include any secret information and only contains the general location,” Yun Chung-sik, a professor of occupational health at the Graduate School of Public Health at Seoul National University, told the Hankyoreh over the phone on Apr. 10.
“The mixture ratio of the chemicals and other matters that Samsung claims are business secrets could not be determined from the report. Samsung needs to specifically explain how the report would compromise its business secrets,” said Park Dong-uk, a professor of environmental health at Korea National Open University.
Another observation is that since the work environment is measured by an external organization selected by the company, it is impossible for business secrets to appear in the report.“There are times when a company does not even provide the measuring organization with the current status of its production equipment because it regards this as a business secret. The most important thing in the report is the amount of the chemicals, and I find myself wondering whether Samsung is reluctant to release the report because the amount written there is excessive or sloppy,” said the president of a work environment measuring organization with 25 years of experience in the field who wished to remain anonymous.
A court has already ruled that the release of a similar report was appropriate based on a “fact check” that it requested from the Korean Industrial Hygiene Association. In February, the bereaved family members of a victim of an industrial accident filed a lawsuit in February demanding that the Cheonan branch of the Daejeon local employment and labor board release the work environment measurement report for Samsung Electronics’ Onyang factory. In this lawsuit, the Daejeon High Court dismissed concerns that releasing the measured location chart would significantly harm Samsung Electronics’ legitimate profits by leaking technical information about the company’s production methods or by allowing information about the company’s production ability to be exploited by its partners or competitors.
By Park Tae-woo, staff reporter