PHM Korea supports the campaign of Joint Action for Reproductive Justice in South Korea which demands people’s action for the decriminalization of abortion and expansion of access to safe abortion in South Korea.

Please Join for the petition. 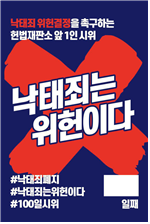 In South Korea, abortion is the only medical procedure included in the Criminal Code (Article 269 and 270) since 1953. Abortion is only legal if the pregnancy causes the woman serious physical health issues, if the pregnancy is a result of an incest/rape, or if one of the parents has ‘eugenic’ disease. Also, this law requires the consent of (male) spouses even in these grounds. Women can be sentenced to a year in prison or ordered to pay fines of two million won (about $2,000) for having abortions. Doctors, midwives and any healthcare workers who provide abortions can face up to two years imprisonment.

Korean women and doctors for sexual, reproductive health and right(SRHR) have been fighting for decriminalizing of abortion since 2010. This year is a very critical moment to decriminalize abortion under the circumstances that the Constitutional Court is currently reviewing a case that challenges the abortion law’s constitutionality. Meanwhile, the Ministry of Health and Welfare issued revised regulations toughening punishment for doctors who perform abortions. The ministry also labeled providing abortion services as an ‘immoral medical practice’.

Abortion has been a widespread experience for many Korean women. According to a government estimate, based on a survey of women of childbearing age, 169,000 abortions(16 abortions per 1,000 people) were conducted in 2010, the latest year for which data is available. While the government has neglected it, abortion practice was not adequately monitored nor officially educated.

Sign the petition to decriminalize abortion and to expand access to safe abortion in South Korea. We’ll collect our voices directly to the Constitutional Court, and push to draw the stalled verdict. By signing you will be a great support to women’s movement in South Korea and stunning wake-up call for our policymakers and judges.